I got to photograph my grandparents

I asked my grandparents if I could take them outside for a minute and photograph them. They obliged and before I could even direct them, this photo happened. I believe this is now my favorite photo I’ve ever taken, and I will treasure it. 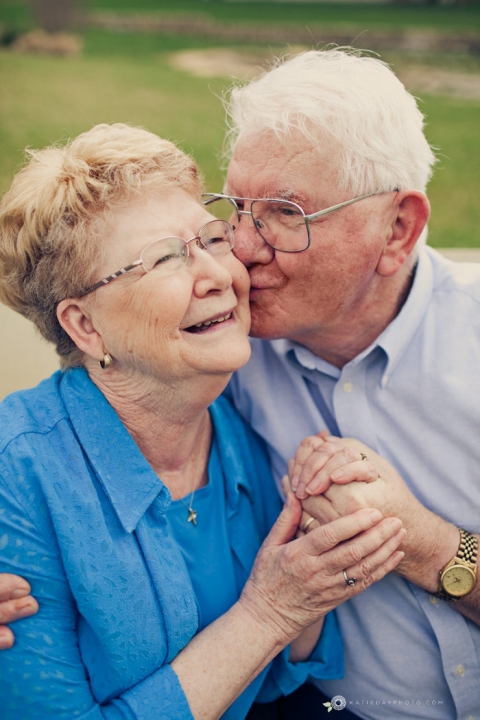 My grandfather was a kid in Poland during World War Two. He has the most amazing and tragic stories from that time in his life where he lived in a concentration camp. One of my favorite stories is about how after his camp was liberated, his family went back to their house (which the Nazis had burned down in front of them) to see what they could salvage. My Babka told Grandpa to run and get some water. He looked for something to contain it and picked up something shiny. Almost immediately something told him to throw it down. As soon as it left his hand, it exploded and tore open his side and intestines. If he had held onto for a second more, he would have died. His father had to bribe a German doctor to operate on him. It was a long shot anyway but they managed to repair him and he survived. This story gives me chills because I think about how any number of things could have happened slightly different and he wouldn’t be here, my mother wouldn’t exist. Our whole family would have never happened. His name is Slavomir Wiercinski, but everyone calls him Joe. : ) He is THE best joke-teller.

My grandmother is Callie B, (ever wonder how my daughter got her name?) She is the best example in my life of a woman with the “unfading beauty of a gentle and quiet spirit” and with “the heart of a servant.” You know those two things the bible tells us womenfolk to have? She’s got them. She doesn’t even have to try, it’s just in her. I’m anything but a gentle and quiet spirit, but I’ve watched her put others before herself my whole life without complaining and it inspires me to just “shut up and do it with a happy heart” each day.

These two can polka like you wouldn’t believe. You’ve never seen feet move so fast. 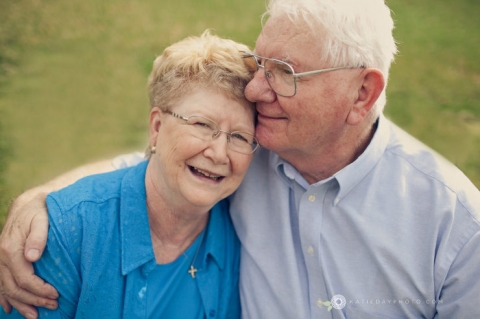 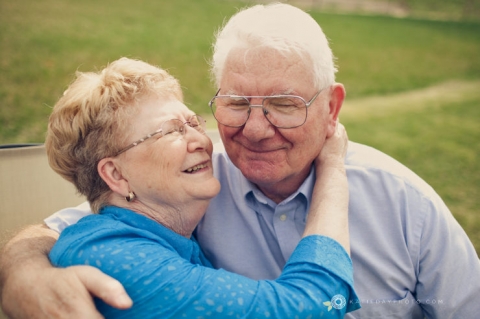 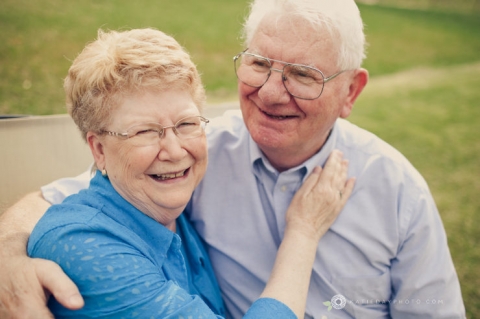 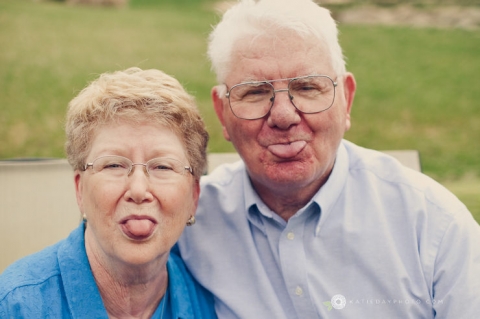 My Callie loves her GG. As I was editing these she saw her on the screen and got so excited shouting GG!!! Papa!!! GG!!!! Now she comes over to me, no matter what I’ve got opened and asks “GG???” 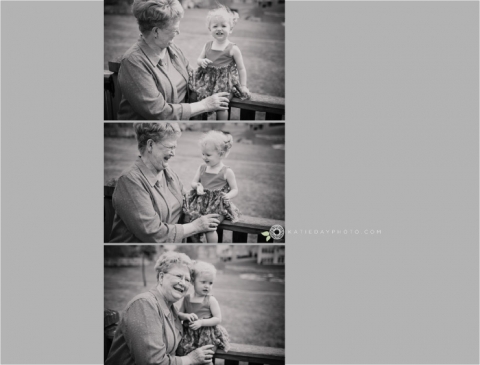 The following photo is a picture Joe took of Callie on their honeymoon. It just so happens to be my other favorite photo of all time. Look at that car! The pencil skirt! The long windy road. Bah! Could she be any cuter??? I have this printed in Callie’s room. 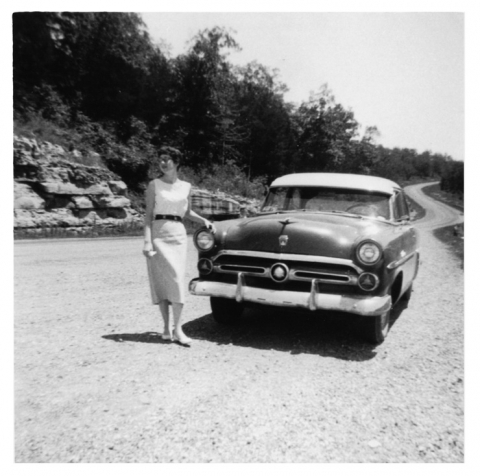 And here are some of the little critters that wouldn’t exist if not for these two people. My dad taught them to play croquet while we were home in KC this past weekend. 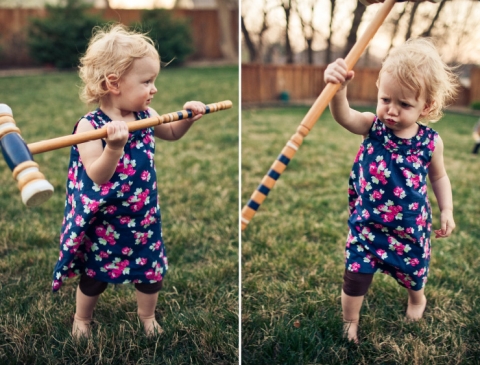 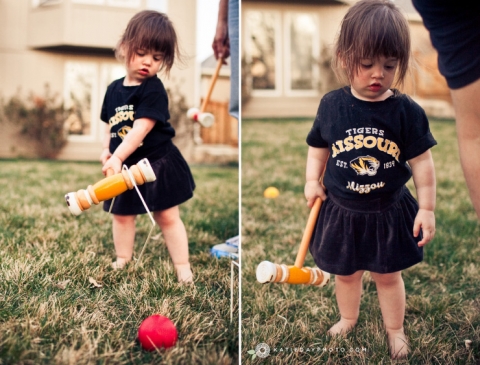 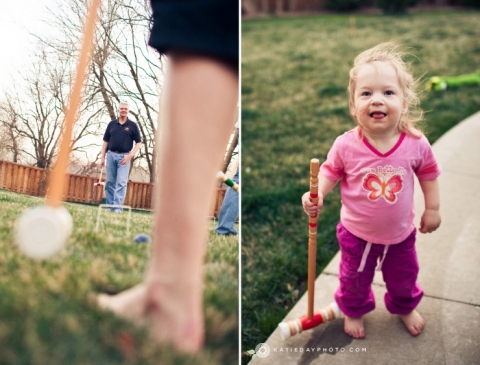 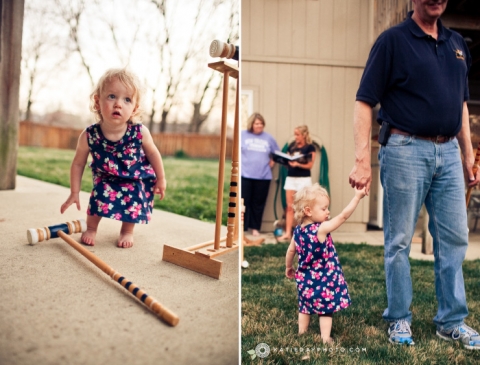 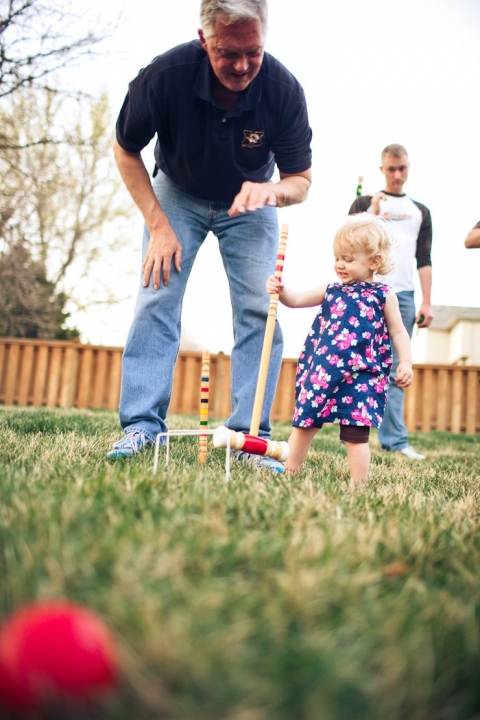 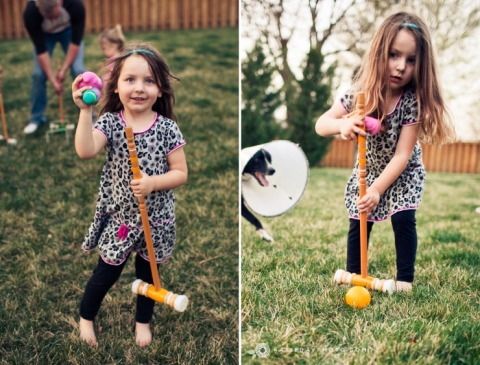 And yes…that is Halpert in a cone of shame. He got into a fight with a barbed wire fence and lost.